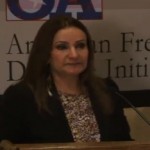 A SUMMER NIGHT FOR HUMAN RIGHTS

Hosted by Pamela Geller and Robert Spencer of AFDI/SIOA Nonie Darwish: Ex-Muslim and human rights activist raised in Gaza; director of Former Muslims United; author of Now They Call Me Infidel; Cruel and Usual Punishment; and The Devil We Don’t Know.

Ibn Warraq: Pakistani ex-Muslim and renowned scholar; author of Why I Am Not A Muslim; The Quest for the Historical Muhammad; Leaving Islam; Why the West Is Best; and many other books.

Walid Shoebat: Palestinian former jihad terrorist and member of the Muslim Brotherhood; now a Christian and a peace activist.

Alex Ibrahim: Originally from Morocco, the son of a religious Muslim family. Because of rumors that he was an apostate, he was stabbed several times in his stomach and left for dead on the streets of Morocco by people crying “apostate.” Now he has gained asylum in the U.S.

Wafa Sultan: Psychologist and Syrian ex-Muslim; author of A God Who Hates.

Dr. Bushra Qader: Originally from Iraq, she is an activist for the rights of former Muslims.

Ramin Parsha: Iranian NajatTV host who was born and raised as a devout Shiite Muslim is Shiraz, Iran. He is associate Pastor at Nejat Church with Pastor Reza Safa, who also was an Islamic supremacist in Iran and is now one of the most prominent ex-Muslim Christian pastors in America.

Amani Mustafa: Ex-Muslim from Egypt, TV producer and host of a Christian show, The Muslim Woman, appealing to Muslim women in the Middle East, North Africa, and the Arabian Peninsula. Her show reaches 300 million households globally with 50 million viewers per live program.

Mohammed Asghar: Originally from Bangladesh, ex-Muslim author and an authority on the Qur’an.