The Former Muslims United civil rights campaign is reaching out to Muslim leaders. We are asking them to repudiate the Shariah legal doctrine that requires the punishment – and in most cases, the execution – of former Muslims who choose to exercise their rights to religious freedom and freedom of speech.

The “Muslim Pledge for Religious Freedom and Safety from Harm for Former Muslims” – “The Freedom Pledge” – is being sent out to Muslim leaders nationwide, on a rolling basis. A list of the recipients is posted and updated regularly, with the date the letter was sent.

A second set of letters was sent on July 4, 2012.  This time 234 letters were sent to 102 organizations and agencies.  For the first time, Muslim leaders in the executive branch of the U.S. government were included in the mailing.  See the latest information on 2012 mailings here.  The 2012 pledge adds a line stating “Signing the pledge does not constitute in any way endorsement or support of Former Muslims United, Inc.” to make it even easier for Muslim leaders to sign.

The text of the 2012 cover letter and the “Muslim Pledge for Religious Freedom and Safety from Harm for Former Muslims” pledge are below:

We are all aware of incidents of intimidation, threats of violence, assaults, imprisonment, and murder against former Muslims here and abroad because they left Islam.  We call on you, as a Muslim leader or as a Muslim in a position of responsibility in federal, state or local government here in the U.S., to repudiate the threat from authoritative Shariah to the religious freedom and safety of former Muslims.  As leaders of Former Muslims United, we ask you to sign the enclosed “Muslim Pledge for Religious Freedom and Safety from Harm for Former Muslims,” known as the Freedom Pledge. We reach out to you with a sincere hope that you will sign the pledge to show your support for ensuring peace, justice, safety, and freedom for Muslims and former Muslims alike.

We sent the Freedom Pledge to 125 leaders of Muslim organizations in America almost three years ago, on September 25, 2009. On that date in 1789, the U.S. Congress passed the Bill of Rights. This was a fitting date to put our pledge to the world, for the first of those rights guarantees religious freedom, which includes the right to leave Islam, to change our religion from Islam to another religion, and to express unbelief in Islam.

As our Declaration of Independence states, these rights are unalienable, and among them are life, liberty and the pursuit of happiness. For former Muslims, who throughout history have lost their liberties and often their lives when they left Islam, America’s Declaration of Independence, signed on July 4, 1776, has special significance. Therefore, we are sending out the Freedom Pledge again this year, starting on July 4, 2012, to over 200 Muslims in positions of responsibility in government and private organizations. In the spirit of 1776, we extend to you the opportunity to repudiate the Shariah doctrines against people who leave Islam.

In 2009, only two people signed the pledge: Dr. Zuhdi Jasser of the American Islamic Forum for Democracy and Dr. Ali Alyami of the Center for Democracy & Human Rights in Saudi Arabia. Let us hope that this year all American Muslim leaders, especially those chosen by our elected officials as advisers, will join them.

As leaders of Former Muslims United, we have pledged our lives, our fortunes, and our sacred honor to achieve for former Muslims their unalienable rights.  We urge you, as a Muslim leader, to support our claim to these rights by signing the enclosed Freedom Pledge.

Please sign the pledge and encourage others in your organization to do so, as well. Our request is simple. We look forward to your timely response within two weeks. The need is urgent. 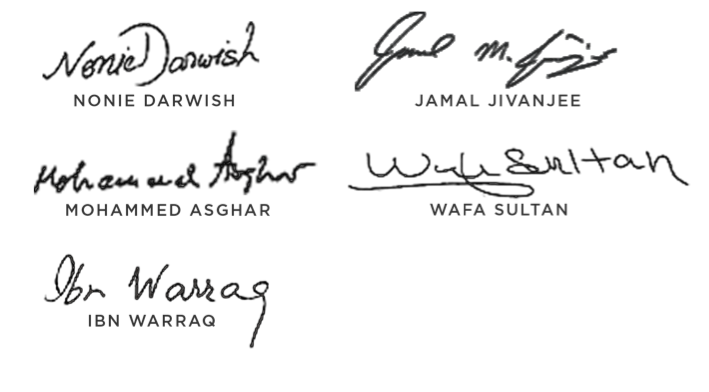 All four schools of Sunni Islamic law (Hanafi, Maliki, Shafi’i, and Hanbali), as well as the other main schools of Shia Islamic law (al- Ismāʿīliyyūn  and Ithnāʿashariyya),  unanimously agree that a former Muslim male, also known as an apostate, must be executed. While some hold that an apostate woman should also be executed, the Encyclopedia  of Islamic Law: A Compendium  of the Major Schools, adapted by Laleh Bakhtiar, states that she should be imprisoned or beaten five times a day until she repents or dies. These specific world-renowned Islamic legal authorities join in this consensus:

Therefore: To support the civil rights of former Muslims, also known as apostates from Islam, I sign “The Muslim Pledge for Religious Freedom and Safety from Harm for Former Muslims”:

I renounce, repudiate and oppose any physical intimidation,  or worldly and corporal punishment, of apostates who leave Islam, change their religion from Islam to another religion, or express unbelief in Islam, in whatever way that punishment  may be determined  or carried out by myself or any other Muslim including the family of the apostate, community, Mosque leaders, Shariah court or judge, and Muslim government or regime.

Signing the pledge does not constitute in any way endorsement or support of Former Muslims United, Inc.